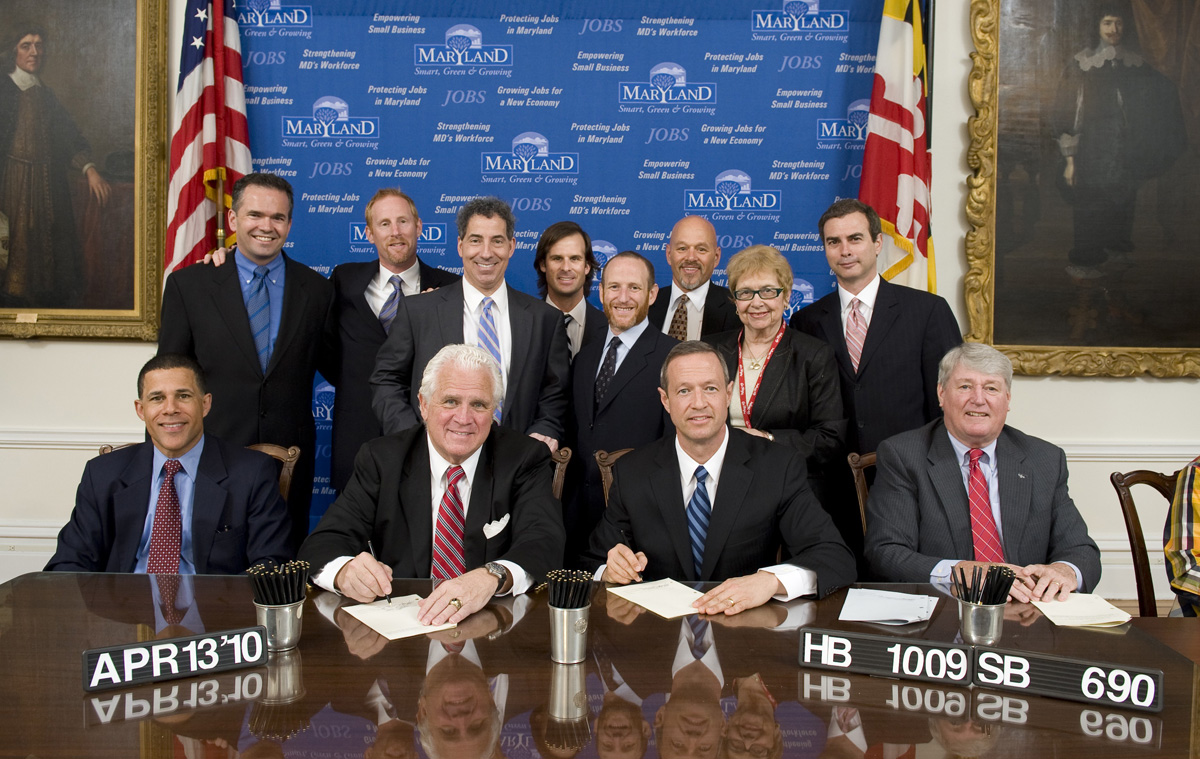 I was at the Maryland State House last week with the Governor of Maryland, Senator Raskin and bCorp founders for the signing of SB690. Lateral Line, a company I started with my brother, was a founding member of a type of company that strives for a triple bottom line. The new law is the first in the country to make it a legal type of company called a “benefit corporation”. A press release from the signing is below.

Press Release
April 13, 2010
MEDIA ADVISORY FOR IMMEDIATE RELEASE
CONTACT: Senator Jamie Raskin 410/841-3634
Andrew Kassoy, B Lab, 917-497-3903
Brandon White, Lateral Line, 410-310-7051
Governor Signs Bill Making Maryland the First State in the Union to Recognize Benefit Corporations
Annapolis, Maryland – Senate Bill 690, sponsored by Jamie Raskin (D-20), was signed into law today by Maryland Governor Martin O’Malley.  This innovative, first-in-the-nation legislation will permit businesses in the State to assume a new corporate form called the “Benefit Corporation.”
“This is a great moment in the evolution of commercial life in Maryland and America,” said Senator Raskin.  “We are giving companies a way to do good and do well at the same time.  The benefit corporations will tie public and private purposes together.”

The legislation, which recently passed unanimously in the State Senate and with a margin of 135-5 in the House of Delegates, allows companies to officially incorporate a social or environmental purpose into their charter.  “It will build social responsibility into the DNA of the company,” said Senator Raskin.

B Lab, a nonprofit organization founded by community-minded business leaders Jay Coen Gilbert, Bart Houlahan and Andrew Kassoy, all of whom traveled from Philadelphia to attend the bill’s signing, was launched in 2006 with a mission to “harness the power of business to solve social and environmental problems.” B Lab is considered the “gold standard” in identifying the most socially-responsible and sustainable businesses in the country.

“Today marks an inflection point in the evolution of capitalism,” said Kassoy. “We finally have a market-based solution allowing investors and entrepreneurs to make money and make a difference.”

Also present at the signing were Jim Epstein, Chairman of EFO Capital Management, Inc. and investor in common good enterprises and Brandon White, CEO of the B Lab certified company Lateral Line, based in Easton, MD.  “This legislation is important for Maryland companies like ours that are out raising money by enabling us to hold on to our triple-bottom line mission as we grow,” said White.

The new law will offer legal protection to benefit corporation directors who make reasonable business judgments incorporating social and environmental values.  Benefit status will be adopted via a shareholder vote and will send a signal out to customers and investors alike that the company has a greater purpose at heart than profits alone.
The Benefit Corporation’s leadership will be required under the new law to publish and distribute to shareholders an annual report describing the ways in which it has executed the company’s promised social mission as well as its for-profit business activities.  Additionally, the company will need to adopt and identify in its report a third-party standard for measuring its effect on the community at large and on the specific interests it has elected to focus on.

“We are going to become the Delaware of B Corporations,” said Senator Raskin.  “Tell the world: we’re open for benefit corporations.”

Serial entrepreneur, internet pioneer, tech geek with two exits under his belt so far. Host of Build a Business Success Secrets Podcast teaching entrepreneurs how to write a business plan for success.